As a cleft kid, it’s funny to me how growing up I never knew other cleft kids and maybe part of that is because I am from a small town or maybe part of it is that it might not have been as common. Regardless of the reason, I now feel very fortunate for the fellow clefties and even parents of cleft children that I have met.

The first time I “met” parents of cleft children was in 2001 when I joined a cleft chat group. I enjoyed reading the parent perspectives and I liked that I was able to give a high school cleftie perspective to parents of little ones. Two of those mom’s I have met in person and their families are now my family, at least that’s the way I see it. 🙂

My next cleft related encounter was at a mall. I was at the check-out counter purchasing some clothing when the cashier said “Who’s your doctor?” Not realizing what she meant I looked down at myself, touched my face, and gave her a puzzled look. I’m well endowed in the chest area and have always looked several years younger than I am so I assumed that maybe she thought I got a boob job. To that I chuckled to myself. Then the woman asked, “You have a cleft right?”. It shocked me because my cleft hadn’t even occurred to me, I had become so accustomed to my look that I didn’t always see myself as “different”.

I smiled and said, “Oh yes” but looked at her still confused. I wondered how she knew that. “I have twin boys, one of my boys has a cleft. I feel like I can tell other cleft kids now. Who are your doctors?” She was so open and willing to talk about doctors and surgeries and I was definitely willing to listen, but unfortunately the other costumers cut our conversation short.

Then in college I had three different cleft meetings.

1. I sometimes judge at Regional and State Speech Contests and while at one contest I as well as my sister noticed a boy who we were 99.9% sure had a cleft, but again I’m always wary to go up and ask the person. Luckily, I didn’t have to, the boy and I caught each others eyes and smiled each other. That was all that was needed, the boy introduced himself and indeed confirmed he had a cleft. I was really excited to meet him because like me, he competed in Speech Contests and was obviously a confident individual. 🙂

2. My Junior year of college I moved into an apartment complex and to my surprise one of the girl’s living above me was born with a bilateral cleft-lip and palate. I was so excited to finally meet someone my age born like me, we became friends and still keep in touch via Facebook.

3. During my Junior/Senior years of college I had many visits with my current surgeon. I remember one visit more so than others. I was waiting in the waiting room and I saw a couple with a baby. I wondered if the baby had a cleft as my doctor is a craniofacial surgeon after all. When the mom took her son out of his car seat I realized he indeed had a cleft. I leaned over and said “He’s adorable”. These two words led to a small conversation about what surgery their son would be having and what surgeries I have had and any advice I would give them. That same day, after my appointment with my doctor but before I left the building my Doctor introduced me to another couple with a cleft baby so that they could see a positive outcome of what a cleft child looks like to ease the new parent’s fears.

While working at the job I’m at now (I’ve been there five years) I have had two specific “meetings” with clefties.

1. While out at Old Chicago one afternoon with my co-workers I noticed a rambunctious little girl in the booth next too us. She was bouncing up and down and smiling quite a bit. I noticed she had a cleft. She was an adorable blonde three-year old. I could tell though that her mom was wary of stares. My whole meal I wondered if I should go over and say anything. Just when our group had gotten our checks I decided to be bold and go to the mother. I could tell she was shy but after talking with her and saying hello to her daughter I could tell she was a little more receptive to being open about her daughter having a cleft. Unfortunately we didn’t get to talk long at all but I was glad I at least said hi. However later that day I was kicking myself because I hadn’t given the mother my phone number to contact me. A few weeks went by and then one evening while out at dinner in a neighboring town I saw the same mother, with her daughter and her husband. I thought that it couldn’t have been a coincidence that I was seeing them again. I went over said hello and talked to them for a bit. I then gave the family my contact information and told them that if they ever had any questions or needed any moral support to give me a call.

2. I work with a disability program and one day one of the applications I came across mentioned that the applicant had a cleft. I debated if I should mention to the applicant that I too had a cleft since I had never met her. Well, one day she e-mailed me with some questions and it opened up the opportunity to tell her that I had a cleft as well. We exchanged several e-mails after that, sharing our stories of good and bad experiences. It was such a great thing to get to talk to someone older than me with a cleft. I hope to meet her in person one day. 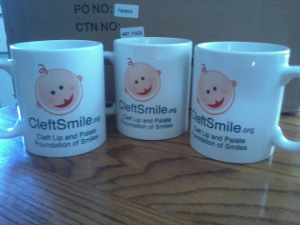 This photo is property of http://www.cleftsmile.org

Hello all! From time to time on my blog I will create posts of awareness. This awareness will come in a type of shout out to businesses, surgeons, websites, etc. that I think might be useful to those of you that read my blog.

My first shout out is to The Cleft Lip & Palate Foundation of Smiles or as I know them www.cleftsmile.org

Cleftsmile.org is an excellent resource in educating people on cleft related topics. The foundation can also be found on Facebook and Twitter.

“The vision of the Cleft Lip & Palate Foundation of Smiles  is to provide support for individuals and families with cleft lip and/or palate  and other Craniofacial anomalies” (www.cleftsmile.org, 2013).

I think another amazing fact about this organization is CEO and Founder, Rachel Mancuso is a parent of twin children with clefts so you know that the information that you are receiving is not only beneficial but relatable to those of you parents out there that want/need support.

As you can see from the picture, The Cleft Lip & Palate Foundation of Smiles has all kinds of resources to get their name out to the public and I say kudos to them for that!

Anyway, I hope you all check out The Cleft Lip & Palate Foundation of Smiles website and Facebook page. I know I look to it for information and the Facebook page is a great support and encouragement to me personally.